A site specific installation made for the cross media exhibition Changing Ground, land and art, I curated in association with the Barony Centre, West Kilbride, as part of the Year of Natural Scotland. The exhibition was supported by a Creative Scotland, Quality Production Award, 20 July - 15 September 2013.

The Barony Centre is a converted 19th century church and gallery, a space filled with daylight and character. It is located in West Kilbride (Cille Bhrìghde), Ayrshire, Scotland.
In my three window installation the narrative voice is that of Bride, 5th century Irish abbess St Brigid of Kildare and her precursor pagan celtic goddess Brigit. From her the town is named (Cille Bhrìghde). In this installation she reclaims the land and its pollinator the bee. The warrior profile contained within the Barony’s windows is inverted. It is Brigid who is now standing guard. The knight’s sword has been substituted for a domestic rolling pin molded from unfired West Kilbride clay and straw. A second window features the apertures of a beehive, another Brigid symbol, while in a third window the warrior’s iron shield is similarly formed from West Kilbride clay and straw and embossed with recycled ceramic teapot lids. Brigid’s female voice is associated both with flames and craftsmanship, and fire transforms clay or the land into ceramic. This alchemical process where the ground is transformed from one material into another is a central metaphor of Changing Ground, land and art. 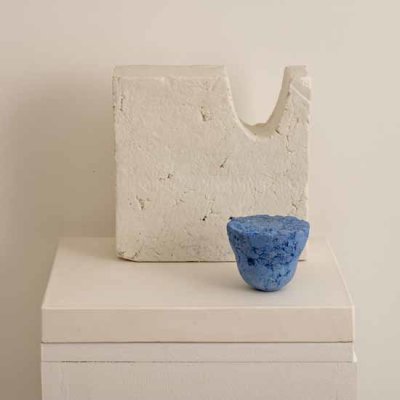